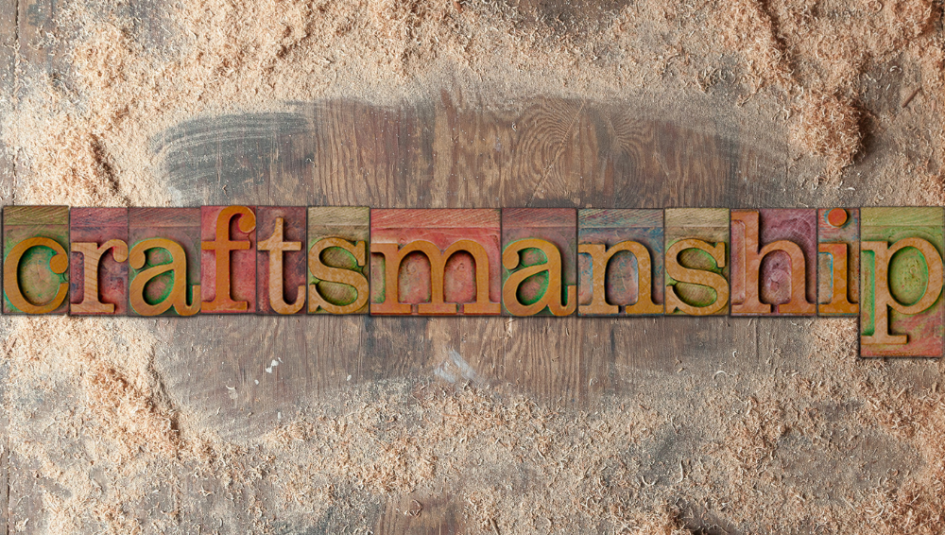 I built a house in the 1990’s, almost entirely by myself. Two tales of craftsmanship came out of that.

I had forty-four sheets of plywood standing on their edges in a rack while paint dried on them. I walked between that rack and the wall to dislodge something and the rack collapsed. Those forty-four sheets of plywood dominoed over on me. The force threw me against the wall so hard, my elbow hit the wall and my right hand got knocked off my forearm, and three bones broke in my wrist. I was pinned to the ground with the pile in my lap. Fortunately, I am blessed with an inordinate supply of adrenaline. I hefted the pile and squirted out from under it like wet soap in a soaked hand!

What’s that got to do with craftsmanship?

The surgeon who saw me the day after the emergency room doctors erroneously diagnosed the injury took absolute control of my care and performed two surgeries that completely restored functionality to my hand and wrist that would not have been possible without the procedure he developed for such injuries, and I got to watch. Yes, I watched both surgeries with my arm sedated from the shoulder down.

What I witnessed was a real life, real-time lesson in craftsmanship.

Dr. V took those broken parts and with only his fingers, a few tools, and a medieval-looking contraption that clamped the arm to the table and tensioned all the fingers away from the elbow, he manipulated the fragments with delicacy, intent and precision. Soft tissue was gently massaged out of the gaps and each fragment squeezed into place. Then, he laced the puzzle together with a web of stainless-steel threaded rods. It was masterful! I have full use of that hand and wrist only because of his craftsmanship in surgery.

The second story came later in the second story of the house, in the master bathroom. I was taking a couple of friends through the place just as it was nearing completion. These guys were both builders and one a fine cabinetmaker as well. When we walked into the bathroom, they looked at the Jacuzzi tub and the enclosure it sat in and one said to the other, "That looks like it grew there!” The other smiled and nodded in agreement. I could not have heard a better compliment.

I had built a cabinet around the tub and fitted it with mirror-polished stainless-steel marine fittings. The plywood cabinet I had hand-sanded between each of its twelve coats of paint. Seven of those coats were white and five were clear coats. The finish had depth and richness and it gleamed.

That recognition was powerful.

The whole reason for embracing the word Craftsmanship is that it has such a visceral effect. It is visual, emotional, tactile. You can craft intricate jewelry or a clever phrase. Craftsmanship is evocative and sensual, precise and sublime. Nostrils flare and the back of your neck tingles. You hear it in eloquence and music and the tune of a fine automobile. You experience it in the poignant portrayal of a character. The computational code that guides you fluidly through the sharing of a photo with a friend while you are both still talking on the phone, is craftsmanship most will never see; invisibly allowing for an experience that is at once both easy and intimate.

In all of the finest crafted works of the world, there are aspects or parts of the whole that are essentially invisible or unknown; in the background or under the hood. In some finely-crafted firearms, there are ornate filigreed mechanisms which can only be seen when the weapon is completely disassembled. In architecture, there are components of buildings which have the fit of unimaginable exactitude and the finest attention to detail, yet are only visible by deep inspection or fortunate happenstance.

The commonality of fine craftsmanship is a high and holistic standard of excellence, relative to its audience, its user, or its recipient. If that audience is a god or God, then we see temples and cathedrals of astonishing complexity and detail. If it is to the user of a wooden pallet, then that pallet is constructed in such a way as to be solid and strong, un-hindering in its utility, with square corners and clean edges, and no cracks or evident flaws.

Whether woodwork or automobile, architecture or music, literature or software, crafting your product to the ultimate tolerances appropriate for your audience is how to accomplish that.

The opposite of this is also evocative, but in an entirely disheartening way. In home remodeling, there is a term which describes a remodel or addition done poorly: remuddling. In software design and development there are terms for products or code not usually deemed the hallmarks of craftsmanship: Bloatware, scumware, and spaghetti. Marketing has its malignant monster, too: spam. All of these are hastily conceived, shabbily constructed and irritatingly intrusive.

But let's return to the brighter side of the coin.

There was a Roman born in the first century BC named Marcus Vitruvius Pollio, known more simply and in perpetuity as Vitruvius. Vitruvius is most known for his "De architectura,” a treatise of ten books mostly about architecture and city planning, but also military machines and even astronomy. In that, he describes the three key aspects of architecture: Use, Construction and Aesthetic Effect. These forever apply to any physical design.

They are also useful to discuss Craftsmanship.

Vitruvius surmised that the reason for incorporating numerous visual "tricks” into the components of early Roman temples such as the Parthenon was to attain the paragon of proximity to perfection as can be humanly perceived, worthy of the gods for whom those temples were created.

The huge platform of the floor of the Parthenon was curved slightly upward, not flat to compensate for our own human visual distortion. The mighty columns, which appear to have straight lines upward, are actually bowed out slightly at a precise and mathematically-attained degree (entasis) so that they appear to be straight, since our eyesight normally tends to "pinch” the long sides inward, giving each column a "waist.” These efforts aligned with aesthetic effect.

You could not have slipped a piece of paper into the joints between any two of the massive carved stones in the Parthenon’s columns when it was built. Some joints were said to be invisible - astonishingly impressive tolerances for 2500 years ago - or today. This and its longevity spoke to the near-perfection of the construction.

The actual use of the Temple we can never see as it was in its day, but we can imagine throngs of reverent faithful gathered in awe to witness ceremonies and celebrations for the goddess Athena. I am sure the Parthenon served magnificently.

It took just nine years to build the Parthenon. It really looks like it grew there. This was Craftsmanship at the asymptote of human excellence.

While a seemingly neutral term, Craftsmanship really carries positive connotations of excellence, forethought and care. It is not perfect. It is damn good.

As a Value of our company, the pure potency of the word inspires us to be vigilant of our standards. The intensity of the market, the constant influx of new technologies, and the ever-present pressures of business exert their urgency on us all to put out. But lean does not mean hasty. Minimum does not mean miserable. Craftsmanship does imply excellence.

We will strive at ReCapturit to embody Craftsmanship into everything we do. Occasionally, hopefully rarely, we may miss the mark. Please let us know if we do.

Read Values - Learning
Back to About Us Page