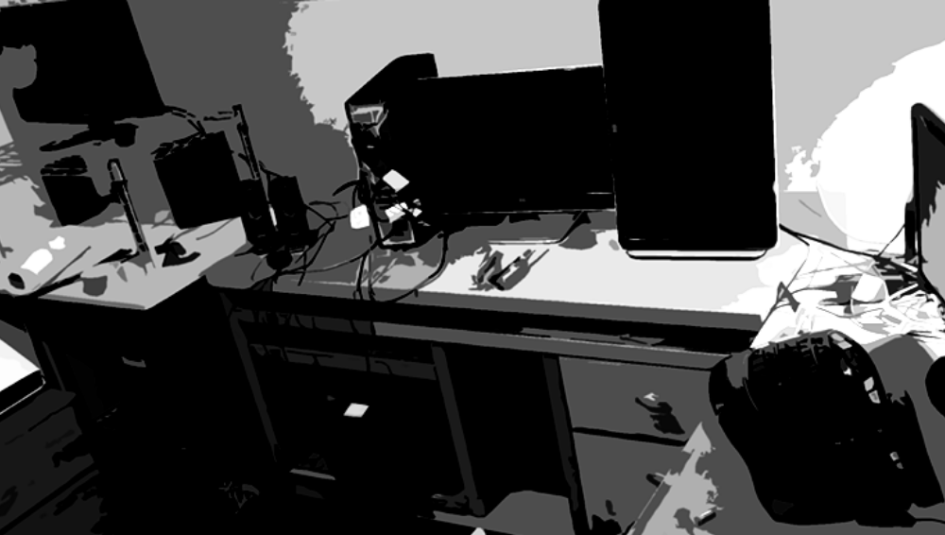 At times, you need to chuckle when life throws you a $#it storm. Here's a tale for the "It's Gonna Be a Funny Story a Few Years from Now" category:

More than a month ago, in the morning of a regular work day, my office desktop computer started doing quirky things. Within an hour it was evident that this machine was on the last leg of its journey. It had been a long journey, too.

I bought this and another desktop computer in the same year, 2012. I added better graphics cards to them and more RAM. In 2016, I took them both in to have new solid state drives as their main drives, 1Tb drives for their data, and a couple of 500Gb backup drives inside, too. So they were good, strong machines with some guts.

But guts or no guts, they had miles on them, and their basic innards were not keeping up with the times (motherboard chips and such were no longer compatible with today's tech). So on this regular work day, the main machine would no longer let me use several key programs. Oh, I tried a few tricks, but no luck.

So, I fired up desktop 2. It needed some updates and I started with that, but it soon just plain stopped. It froze. It would not allow me to use Outlook nor Firefox nor any of several programs needed to do basic stuff. It also would not output sound. It indicated that audio was operational, but there was no sound coming out. I tried a second set of speakers. I tried headphones. I tried the speakers on the monitor. Nothing. And, I needed to do some online calls - with sound! While I was working on all that, I decided to start up my Surface PC and continue work I had to get done.

Well, it was not to be left out of the fun.

I started up the Surface and it let out a high-pitched constant, staticky squeal. I tried a bunch of different things but could simply not get rid of the squeal.

This meant that all three machines became inoperable - all in one day! No, it was not due to a Microsoft update, either, as some of you may be thinking. Neither the Surface nor desktop 2 were connected.

So it went for the rest of the week, calling tech support at Microsoft and HP and getting passed around for various tech support groups. I logged over twenty hour that week with them, and got the Surface back in working order first - no squeal! It only took five attempts by the final tech person, logged-in directly to my machine, to ferret out the problem. I finally had something to work on other than my phone.

Desktop 1 was toast. I could only hope to be able to move files from it onto a backup drive for easy loading onto a new machine. That I did. I also ordered a new Dell (refurbished) machine on Amazon.

So, I had the Surface operating well and desktop 2 was operational save for one program and absence of audio output. I could work with this, but did not want to for long. This was thin ice.

The new desktop was scheduled to arrive within a few days. As I reviewed the order when I got a shipping notice, I saw that a spec was different in the description there than in the Amazon listing. Oops. So, I checked on Amazon and communicated with the seller, and sure enough, it was a completely different machine on its way than what I had ordered. So, I told Amazon and the seller and ordered another machine from a different seller. The newly-ordered machine was due on February 10th, a week away.

The incorrect machine arrived and I put the return sticker on it and drove over to UPS to drop it off. Just another day not at the office.

I got a message on the 9th that the new order was delayed and would not arrive on the 10th, but likely the day after or possibly as late as the 14th. I checked status every day. It said it was shipped, but that was it. On the 14th, I got a message saying that the order was apparently lost. On the 15th, I cancelled that order and ordered another one, which the company overnighted to me. I got that machine the following afternoon and began the setup process.

Somewhere in a UPS warehouse is a lost computer.

You need to be wary of every little checkbox offered as you go through the setup of a new computer, even though the process does most of the heavy lifting. One trick companies use to get us to buy their services is to keep a checkbox in the bottom left of a window so that it is in the least noticeable place on a screen. One particular such box asked whether I'd like to have OneDrive, Microsoft's online cloud storage service with Office 365, back up all files. Seemed innocuous enough. I could surely indicate later which folders I'd like backed up. But I missed the subtlety and impact of that decision. I evidently chose to have OneDrive back up everything. Everything. That choice caused a cascade of difficulties. Oops.

I then set about to set up the new machine. I installed my Office 365 suite and a few other critical programs, and then went to download my complete stored set of files from my online backup service. This service puts all your files in the same structure as you have them on your computer, so if you need to move them onto a new computer, it does so in the same, familiar fashion you had them in your old machine. Nice. However, as that service loaded all my original files onto my new computer, OneDrive was simultaneously uploading them to its servers. This made things slow. I also was not aware of the OneDrive function happening simultaneously, at least not at that time.

At a point when I was not watching, the OneDrive storage limit was reached, and it stopped. In fact, since all my services - business and personal - are all connected, all my computers and phone were now suffering from the fact that when I was working on something in the Microsoft Office system - which would previously be automatically and instantaneously backed up - they would not. They were stalled. And, I was getting messages everywhere telling me "Your OneDrive is full. You can buy additional storage space by clicking here..."

Remember I said companies do things to get you to spend money you hadn't intended. Yup. Subtle.

Back at the new desktop, all was frozen. I mean stuck. Outlook would not open. Other programs would not operate correctly. I was dead in the water, again. Plus, I had loaded all my email accounts into Outlook at once, and that meant it had to pull in six accounts together, while it was attempting to upload and store those in a OneDrive storage account that was full.

I did not know which files on OneDrive were needed and which had been recently and inadvertently uploaded. There seemed to be folders everywhere, along with lots of red notices reminding me of what I did not need reminding: "Your OneDrive storage is full..."

Yeah, my emotional storage was full, too!

Everything froze. Except me. No, I was working the other end of the temperature spectrum. Not happy. So, I went for a bike ride. At about mile 4, my breathing was no longer due to my emotional state but to exertion. At mile 14, I was in a semi-normal frame of mind and heading home.

I came home, cleaned up, and got back to the mess. First thing I did was to stop the backup loading onto the machine, checking that flow of data. Next was to go to OneDrive and erase all the files that had been loaded up onto that service in the recent process (Did I get the right ones? Did I erase the wrong ones?!).

Then, I decided to reset the whole system and start this all over from scratch.

Since you have to "deactivate" some programs from one computer to reinstall them onto another, and my original computer was dead, you then have to go to the software account or their tech support for each one, which I had just done, so I was not looking forward to all that... again. But onward I went.

The machine took a while to reset. It wipes everything clean and reinstalls Windows, and you essentially get it like a new machine. That happened overnight and I got back to it the following morning.

Last night, now the 27th of February, I had carefully and properly loaded everything sequentially onto the new machine. It all worked. Just before bed, I set up the final email account on Outlook and let it load up. It did. I was satisfied that everything was now in good working order and tomorrow I could go about cleaning up my office and putting furniture and equipment back in place. I shut down the machine and called it a night.

This morning, I set about organizing the office, cleaning as I went, dusting off furniture and equipment and putting everything in its place, and getting order restored. You know how important your work environment is to productivity...

Not so fast, Bucko!

Tidied up and ready to work, I hit the power button to fire it up the desktop in its new home, all wires neatly tucked and zip-tied in place. Whirrr... Whirrr... Whirrr... Black screen with cursor... Nothing. Wait. What??? Try again. Same thing. Unplug and try again. Nope. Unplug any non-crucial peripherals and check everything else... try again. Nope, black screen with cursor. Eager now to launch the computer through my unopen window onto the driveway below, I instead opted for a short walk, replete with a seldom-used yet creative re-positioning of offensive utterings; no time for a 14-mile bike ride.

I got back and my wife (bless her!) got the store's tech help on the phone (owner of the company, even!) and I spoke with him. I walked him through the recent occurrences. Apparently, there is a tiny battery that powers up something involved in the computer's startup and it was dead. Oh, great! He apologized sufficiently and offered to send me a higher end unit with a better processor and specs with rush delivery, but, due to order time, it wouldn't be here 'til Monday. I accepted his offer.

Now, after the trauma and triage of three compromised machines in one day, subsequent support sessions, an original order of a new machine, which was the wrong one I had to return, followed by the next unit shipped, delayed, and finally lost by UPS, to the current unit being sent, set up and operating, then dead, this has been quite the saga. I hope it ends soon! We will see on Monday. Wish me luck.

Like I said at the start, in years ahead this will be a funny story.
Back to About Us Page